I don’t believe that artists have competitors. Just being nominated along side an artist that I admire like Marlene Dumas, was a wonderful feeling. Plus the fact that everyone starts treating you like your special gives you a good feeling. Since winning, I have been interviewed every week. Even by some obscure magazines. Even Radio Opium. The Financial Daily (Financieel Dagblad). Art Magazine Palet. With 8 reproductions of my work.  Golf en Lifestyle. They all want to come to the studio. After the articles came three commissions. I have had to cancel all of my appointments, even commercial ones and ones with galleries. No exhibits. First comes my new book with 175 pages. Everything seems to be rocketing. 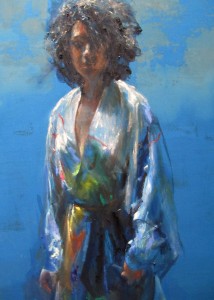 Did Kunstweek determine who won this award?

The Group that determines the top 100 nominees are composed of museums, art journalists, gallery owners etc.They have a special prize for the oldest ‘hero’. The ‘oevre’ prize went to Henk Helmantel. There was een gala evening with flowers and a cheque for 10,000 Euro and a Magnum bottle of champagne. Yet, it was not a night of photographers lined in rows. The long term effects are ‘wow’. All of sudden everyone wants to buy a painting because a prize has been won.

Have you reached that magical place where you have become a good investment?

I am a teacher and 95% of the people are enthusiastic….that also has an effect. That attracts people. It doesn’t say anything about quality, more about popularity. And, after all, my work is easy to look at .

What would you advise young artists to do in order to make an impression?

Paint in series; show the connection between a country or the times we live in. Mathematical cityscapes. For instance. Go talk to the Harbour master at the Western Docks (Westelijke Havengebied) and paint a series of that harbour. Paint long periods of time with regularity and only after the series is finished, then show your work. Painting has to reach a certain height. It’s important to rise above the average. Painting in themes is good, but it’s important to have a subject too. So, being specific is an important tip for everyone.

What do you mean ‘talk to the harbor master; most artists aren’t so extravert? 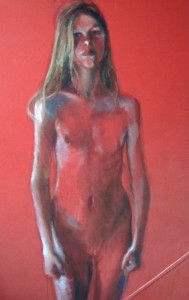 ….Well  perhaps yes they are if they are so enthusiastic that even you want to scream about it from the rooftops. Many artists think that they are ‘museum’ material and refuse to show their work in normal galleries.   Yet, every year they have to take a step back. They have to lower there ideals a bit.

How far does your philosophy go to include the cosmic thought that in the end, it all works out?

I always thought that everyone knew what they wanted. I did. I kept thinking of myself as an artist. I never doubted that!