With the coming of EYE FILM INSTITUTE  in April of this year,Amsterdam has gained its own personal icon and achieved a poignant visibility equal to what the Eiffel Tower in Paris does for France, and what the magnificent opera house in Sydney does for Australia.  The attractive, eye catching structure, on the northern banks of Amsterdam, resembles the shape of an eye. Surely, this design will from now on identify Holland around the world.

EYE, as the locals call it, was an instant hit.  Not only because of its spectacular presence, but because of its astonishing success.   Four times the expected number of people visited Eye Film in the first three months after the opening and the numbers are staggering.  EYE FILM is more than an educational institute and a museum. It houses two exhibition halls and 4 cinema theaters.  EYE has an internationally renowned collection of 40.000 films.  Besides this, EYE regularly pays homage to directors and producers with special presentations and exhibits. Their program includes an interesting array of films from the 1900’s up to and including the present. The interior of the building is as striking as its exterior and provides guests an exalted skyline view of Amsterdam which serves to integrate the northern part of Amsterdam with the city center, just a short ferry ride away. This feat alone is but one of the many achievements that its director, Sandra den Hamer helped make possible.

Sandra den Hamer, recently addressed the student body of the newly arrived Hyperion Lyceum nearby.   The theme of her talk is:  How to turn passion into success.  She gives a very personal and inspiring account of her approach to her work and how she, against great odds, was able to attain her goals.  She emphasizes how never to lose sight of personal dreams by providing the audience 7 essential tips for success.   Here is a summary:

1. Stay curious. This gives birth to passion. It’s a fresh state of mind that will allow you to detect new inspiration and stay amazed.

2. Develop your own view; your unique selling point will help you stand out from the rest and from mediocrity.

3. Anticipate change and act accordingly;  Example:  EYE is an institution in transition and has to adapt to the digital era by preserving and presenting digital as well as celluloid film and did so.

4. Broaden your horizon; keep an eye on the bigger picture at all times. Example:  be aware of new target groups and how to approach them. On our former premises in the past, our main audience was composed  of middle aged movie lovers. In the new museum and with our new program EYE welcomes everyone: students, children, tourists, professionals etc.

5. Create a personal brand; allow for an all-inclusive concept that can grow and change.

6. Get what is called ‘Critical Acclaim’; make sure that leaders in your field are watching your progress and responding positively.

7. Re-energize your own and other’s Passion by sharing your ideals with colleagues and peers.

Sandra recalls moments in her past, that, in hindsight, represent defining moments in a career.  In her youth she punched tickets for awhile in a small theater in her home town.  One day she saw a performance there (by the Dutch theatre company Hauser Orkater) and fell instantly in love with art & culture. A few years later this happened again when she saw The Sacrifice by Andrei Tarkovsky. She calls this love ‘pure inspiration’.   From there her talk takes us along various jobs and studies that ultimately would prepare her for a leading role in the world of film.  She insists, as she learned from a Dutch filmmaker: “Read the paper, look at film, look at the world around you” and stay alert.  Perhaps her most incentive words of wisdom are:    Get out of your comfort zone and be the best version of yourself that you can be.

As from October first we have a TRAM!>>>
First moving tram in North>>>

DAT is proud to introduce our latest addition:  A party tram from the sixties in the heart of our artistic community. THE meeting place for our visitors where we serve you  coffee and tea and provide various workshops. 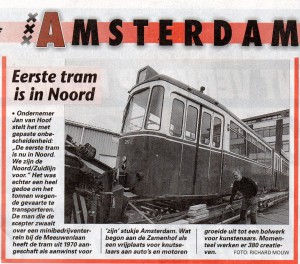